In the late 1800s, in the heart of industrial Salt Lake City, a cement factory known as the Portland Cement Works opened its operation. In those days, manufacturing was a dangerous activity, requiring the use of boiling liquid and heavy machinery powered by the grinding of giant gears. In this environment of early industrialism, the margin for error was small. Throughout the history of the factory, numerous workers learned this reality too late.

George Howe, charged with the maintenance of the coal crusher, was one such worker. One evening, George was alone in the factory oiling the crusher before shutting it down for the night. As he reached across to apply oil deep within the crusher, the machine grabbed his sleeve and began slowly pulling him into its gears. George’s arm was first removed from the socket, then snapped and ripped from his body. Unable to free himself, the man was slowly, but consciously, pulled into the crusher. The roaring machinery and the solid factory walls silenced his cries. George Howe’s entire body was eventually twisted into the gears before being spit out as nothing more than a torn and mutilated collection of bloody flesh. Other deaths include falling into boiling vats, additional grindings, death by suicide via the train , dismemberment, and many others.

For the factory and its managers, this first accident was unexpected and unfortunate. As the frequency of accidents increased, however, it seemed that the factory itself was intent on keeping its gears oiled in blood. The building would take its victims in the blink of an eye leaving them mauled, dismembered, burned, electrocuted or beheaded. As the years passed, the number of stories increased.

The Portland Cement Works eventually closed its doors. As the decades passed, the property fell into a terrible state of disrepair. Several times, would-be entrepreneurs acquired the factory as a home for their businesses. Despite the best of intentions, these businesses never lasted long. Between periods of operation, the property became home to transients and wanderers. In 2010, Fear Factory Haunted House acquired the property and began exploring its expansive spaces, its silos, and its multiple underground tunnels.

Fear Factory is one of the top Halloween attractions in the world, made up of 6 buildings, up to 6 stories high, with 2 underground passages, and is a massive haunted attraction in Salt Lake City, Utah, U.S.A. With awards ranking them as #3 in the world (buzzfeed.com), and top 10 in the US (USA Today & Travel Channel) Fear Factory has quickly grown to be one of Utah's - and the world's - favorite Halloween entertainment attractions. Fear Factory - an attraction so vast that a waiver is required to be signed prior to entry - opens each fall, as well as periodically throughout the year for special events. The attraction has seen more than 11 documented historical deaths, has been featured in TV shows and movies, boasts over 100 nightly live actors, and is heavily awarded within the industry. It's a great place to bring family, friends, coworkers and more for an evening of entertainment, thrills and fun.

The Fear Factory burst on to Salt Lake City’s Halloween scene for twelve nights in 2011, and has been a mainstay and fan favorite ever since. The Fear Factory is Salt Lake City's most popular and only haunted, haunted house, located on the site of the old Portland Cement Company.  During its time in operation, the Portland Cement Company established a long history of paranormal activity, unexplained sightings and unfortunate accidents dating back to 1894, which led many to believe the site was cursed. The Fear Factory capitalized on this phenomenon. While many businesses and residents shunned the facility and left it abandoned for years, the Fear Factory has embraced the haunted history and used it to create one of America’s best Halloween attractions.

Since opening in 2011 the Fear Factory has received a number of awards for being one of the scariest haunted houses in America from media outlets such as USA Today, The Travel Channel, BuzzFeed, FrightFind, Scary Overload and more. In addition to the media, industry associations such as TransWorld Trade Shows and Netherworld Haunted House have recognized the Fear Factory for its innovation and creativity in scaring the living daylights out of visitors.

Over the years, the Fear Factory has achieved a number of significant milestones, including:

2013 – Purchased old school buses and transformed them into Zombie Buses. Forged a partnership with the Gateway Mall in downtown Salt Lake City to provide fans with free nightly parking and transportation aboard the Zombie Buses, from the Gateway to the Fear Factory, and back again.

September 2013 – Started the Last Ride, a zipline that transports guests at breakneck speed from the west tower across the length of the Factory for an overhead view of the horror below.

September 2014 - Launched the Fear Fall, a bungee type ride that allows fans to freefall from the top of the Fear Factory’s tallest tower.

September 2015 - Named one of the Best Halloween Attractions in America by The Travel Channel. The award was given for the best adrenaline-pumping destinations – not for the faint of heart.

2016 - Partnered with Grimm Host Tours to provide fans with private or group ghost tours throughout the year.

September 2016 – Named one of BuzzFeed’s scariest haunted house attractions in the world by its community.

May 2017 - Co-Owner Heidi Dunfield named one of Utah Business Magazine’s 30 Women to Watch. The annual 30 Women to Watch award celebrates Utah’s most successful and influential women as selected by their peers.

August 2017 - Fright Find named the Fear Factory one of the top haunted houses in Utah.

September 2017 – Launched the Dare to Scare app which enables fans to be actively involved in scaring their friends, family and others via wifi remotely enabled props and scares inside Fear Factory.

September 2017 – Started the Toe of Satan Challenge requiring contestants to suck on a satanic sucker from a special “hellfire” chili extract that has a Scoville heat unit rating of nine million.

February 2018 - TransWorld Trade Shows and Netherworld Haunted House announced that the 2018 Legendary Haunt Tour, an annual tour of the best haunted houses in America is coming to the Fear Factory.

September 2018 - Formed strategic partnership with Sizzling Platter, the Utah parent company of Little Caesars and Dunkin’ Donuts for the 2018 season.

October 2018 - Scary Overload, the online place for everything scary - movie reviews, real-life terror, haunted houses, creepy stories, and clowns named the Fear Factory one of the scariest haunted events in America for 2018.

November 2018 - Hosted the 2018 Legendary Haunt Tour, an annual tour of the best haunted houses in America.

June 2019 - The Haunted Attraction Association (HAA) named Spencer Terry, Fear Factory General Manager, to its Board of Directors for 2019.

August 2019 - Taking interactive experiences to the next level, Fear Factory partners with Octagon VR Experiences, to create its own, first of its kind immersive VR haunted house video game, with non-tethered VR goggles, escape room mechanics, zombies, guns and more, all inside a virtual 7 story massive factory and sewer, while physically walking throughout a never before accessed space inside Fear Factory.

May 2020 – Became the world’s first haunted house to successfully open during a pandemic.  The 60 page contingency plan was later released to all entertainment and haunted attractions across the globe, and set a precedent for future attractions to operate under.

July 2021 - Due to overwhelming requests, Fear Factory becomes the first haunted house in Utah to currently offer a season pass, along with their other elevated ticketing options including VIP, Instant Entry, ROCKSTAR elite, and the Behind the Sets & Screams Tour tickets!

October 2021 - Fear Factory celebrates its 10 year anniversary that included large bonuses for their staff, taking the leadership on a cruise, and new updates in several areas of the attraction. 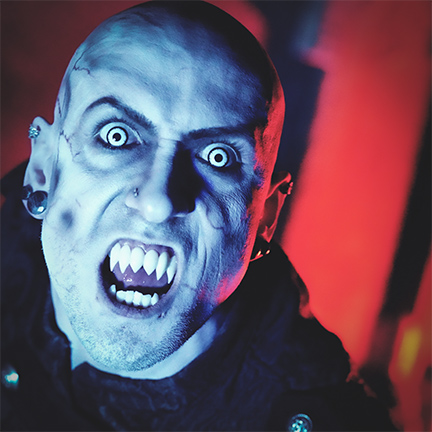 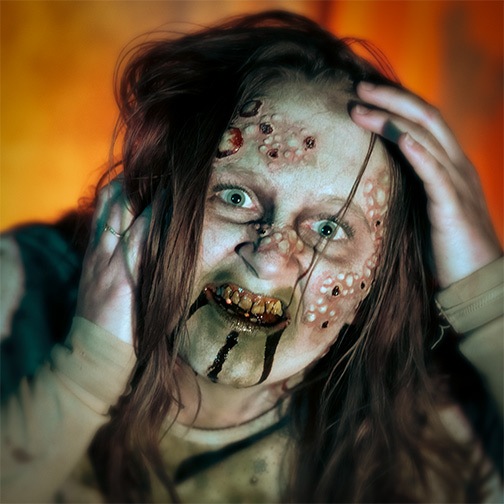 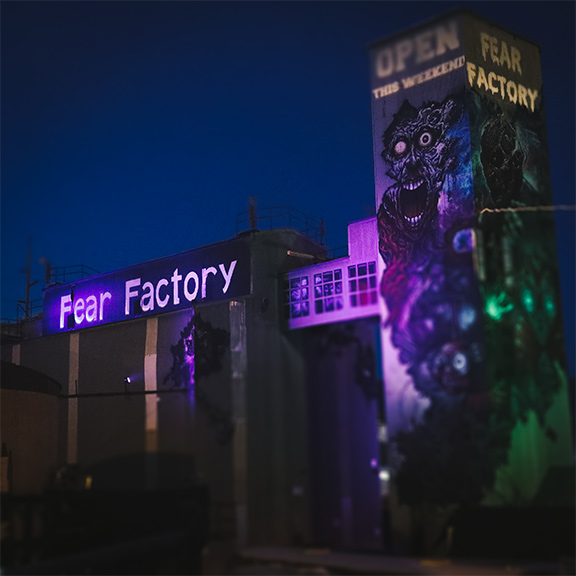 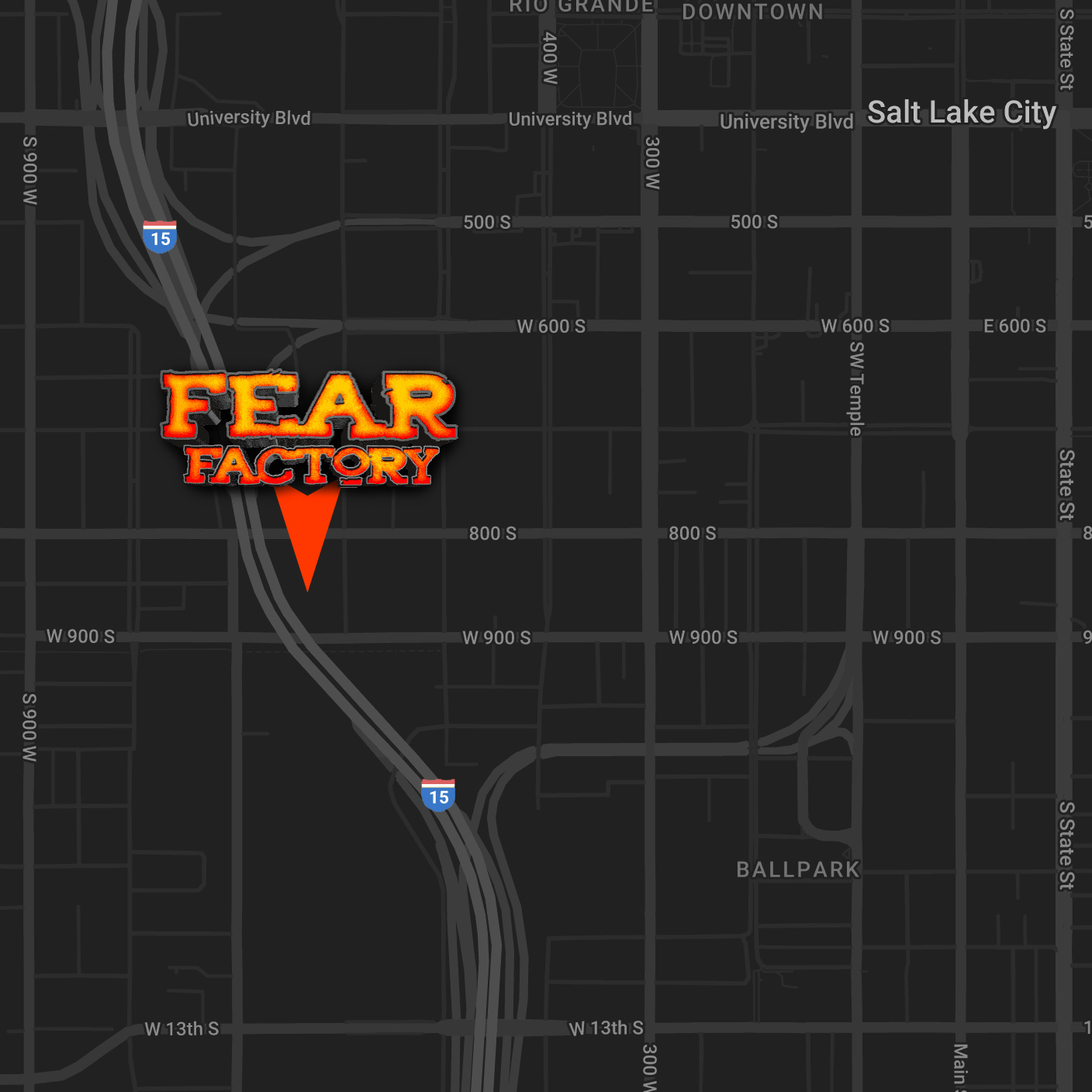 Fear Factory is one of the top Halloween attractions in the world, made up of 6 buildings, up to 6 stories high, with 2 underground passages, and is a massive haunted attraction in Salt Lake City, Utah, U.S.A. With awards ranking them as #3 in the world (buzzfeed.com), and top 10 in the US (USA Today & Travel Channel) Fear Factory has quickly grown to be one of Utah's - and the world's - favorite Halloween entertainment attractions.